Busy month for cannabis in New Mexico  The Leaf Online

FinancialBuzz.com News Commentary NEW YORK, May 7, 2019 /PRNewswire/ — As the burgeoning cannabis market expands around the globe, most …

In October 2017, just a few months after legal cannabis sales kicked off in Nevada, dispensary owner John Mueller sat down with Clark County Sheriff Joe Lombardo for an hourlong chat about the next step forward for cannabis in the Silver State.

“We had over 40 million tourists coming to Las Vegas, a growing number of them buying marijuana, and absolutely nowhere for them to legally use it,” Mueller said. “People were consuming illegally on the streets, in their cars, parking garages, and hotel rooms.”

More than 18 months after that early meeting, Mueller took his plea to the Las Vegas City Council this week. Nevada’s Legislature had axed a bill to permit state-licensed cannabis lounges, so it was up to city officials to give the green light.

“We want to get in a controlled environment,” he explained. “We’ve got to give people a legal way to go out and consume something we’re selling to them and we’re collecting taxes on.”

His mission was a success. After a slew of public meetings, council workshops, and hearings over the past year and a half, the City Council on Wednesday voted 4-1 to approve an ordinance allowing cannabis lounges.

The 11-page final ordinance, amended several times since it was first proposed in December 2017, allows for on-premises food and non-alcoholic beverage sales. The lounges themselves are required to be separate indoor facilities–no windows or outdoor access–and can’t be located within a cannabis retail space. To appease the resort and gaming industry, which began lobbying late in the process, lounges can’t be located within 1,000 feet of a Las Vegas property that offers gaming. Just about everything else is fair play.

Local licensing for the lounges will be available only to licensed cannabis retailers located on city property–currently 12, plus an additional 10 stores slated to open in Las Vegas by the end of the year.

The additional 38 dispensaries located outside city bounds, such as in North Las Vegas, Henderson, and unincorporated Clark County–which includes the Las Vegas Strip–are excluded from the ordinance. Those marijuana stores will have to wait until their respective local governments approve social consumption.

For Mueller, who owns Acres Cannabis, a retailer located on city land just north of the Strip, the near-exclusive opportunity represents a chance to lead, he said. While the new lounges won’t open for at least four months, according to city spokesman Jace Radke, Mueller said he’s ready to hit the ground running.

An 8,000 square-foot room located at the back of Acres has been set aside for social consumption for months now, and it will soon be turned into a lounge–not to mention a makeshift concert venue, massage parlor, yoga studio, and private event center–where cannabis consumers of all walks of life can enjoy the plant together, Mueller said.

Because the lounges can’t be located in the same facility as a dispensary, Mueller, like other retailers owners planning to open an associated lounge, will have a separate address for the consumption facility–something as simple as labeling it “Suite B.”

Mueller said that’s “just the beginning” of his plans for the lounge. For competition’s sake–at least seven to eight other dispensaries are expected to open their own lounges–he said he’s keeping most of the details under wraps until the venue opens to the public.

Frank Hawkins, a former Super Bowl-winning running back, is another owner planning to open a lounge. Hawkins’s 7,800-square-foot facility, just up an elevator from Nevada Wellness Center‘s shopping area, features over a dozen separate rooms with private areas for playing virtual reality games and dominoes, a recording studio, a CBD product store, and even a boardroom for groups that have expressed interest in holding meetings there. A shuffleboard table, a room with a giant white wall and projector, and an area for vending machines and microwaves are among other planned amenities for Hawkins’ lounge.

“We wanted this to be upscale,” he said, “so when athletes and entertainers come, they can have their own private rooms.”

The Las Vegas Paiute Tribe, which operates the 15,800-square-foot NuWu Cannabis Marketplace on tribal land near downtown Las Vegas, may be the lone group outside city limits to benefit from the ordinance. The tribe can play by its own rules thanks to a special pact with the Nevada governor’s office that allows the Paiutes to bypass federal law on negotiations related to marijuana commerce.

Reached Friday, a Las Vegas Paiute representative said the tribe was not ready to comment. But this past March, tribal Chairman Chris Spotted Eagle said that a vacant, 11-acre plot of tribal land next to the dispensary will become a consumption lounge “when the time is right.”

Cannabis and creativity are often portrayed as linked, with their connection seeming culturally agreed upon. From creativity-themed cannabis products, to stunning hand-blown bongs, artist testimonials, and the popularity of “puff and paint” art classes, anecdotal evidence overwhelmingly says creativity and cannabis are kindred indeed.

But people have a lot less to say when it comes to the why’s and how’s behind this commonly-accepted phenomenon. Is the link between cannabis and creativity authentic? Here’s what current science has to say about it.

Blood to Your Creative Bits

Research has revealed that creativity is associated with the brain’s frontal lobe, and that cannabis consumption increases cerebral blood flow (CBF) to this area, which makes it more active. As reported by Jasen Talise in the Berkeley Medical Journal, experiments done in 1992 found that CBF increased after cannabis consumption. (These findings were confirmed by further research done in 2002.)

Talise spoke with Alice Flaherty from the Department of Neurology at Harvard Medical School, who said of CBF, “When subjects with high and low creativity are compared, the former have both higher baseline frontal lobe activity and greater frontal increase while performing creative tasks.”

Such activity stimulates creative output in two ways. First, it activates the area near the brain’s nucleus accumbens, which Flaherty found correlates to increased creativity. Secondly, the frontal lobe serves as the headquarters for something called “creative divergent thinking.”

Divergent thinking is a common scientific measure of creativity. It is a type of thinking that explores many possible solutions and typically occurs in a spontaneous, free-flowing, non-linear manner. Put in other words, divergent thinking employs methods like brainstorming, creative thinking, and free writing to come up with outside-the-box ideas.

For an example of why scientists connect this kind of thinking to cannabis use, we’ll quickly travel back to 2001. In high school, a friend of mine’s room was a 420 oasis, home to many people’s early cannabis experiences–and the walls were covered with evidence of this exposure, thoughts scribbled in marker, so creative I can still remember a few nearly two decades later:

“I’m a butterflyyyyyyyyyy.” (Drawn in the shape of butterfly. Author may have been involved.)

When it comes to cannabis and creativity, dosage is key.

“Levametation,” the word in the second example, was created for a decidedly outside-the-box game show proposed by its author. It combines “levitate” and “elevation” to describe a process in which cannabis smoke would hang in the air after rising from the floor below, subtly smoking out the contestants. (Cleverest whilst unwittingly stoned wins!) So in this case, divergent thinking came in the form of brainstorming various names to describe an invented process that’s as dubious as it is imaginative.

In day-to-day life, divergent thinking is commonly employed whenever you list numerous possibilities to come up with innovative options; from how to raise Q2 fiscal earnings, to how best use that Costco supply of albacore tuna. Or more broadly, you use divergent thinking whenever you’re working to open your mind in various directions and to new potential solutions. We’ll go over a few widely-referenced studies that measure this kind of thinking to discern how cannabis use affects creativity.

Leafly covered one such study in 2014; it concluded that when it comes to cannabis and creativity, dosage is key. The study found that in low doses (5.5 mg THC), cannabis slightly improved two aspects of divergent thinking: fluency, or the number of responses provided, and flexibility, or the variation in answers. 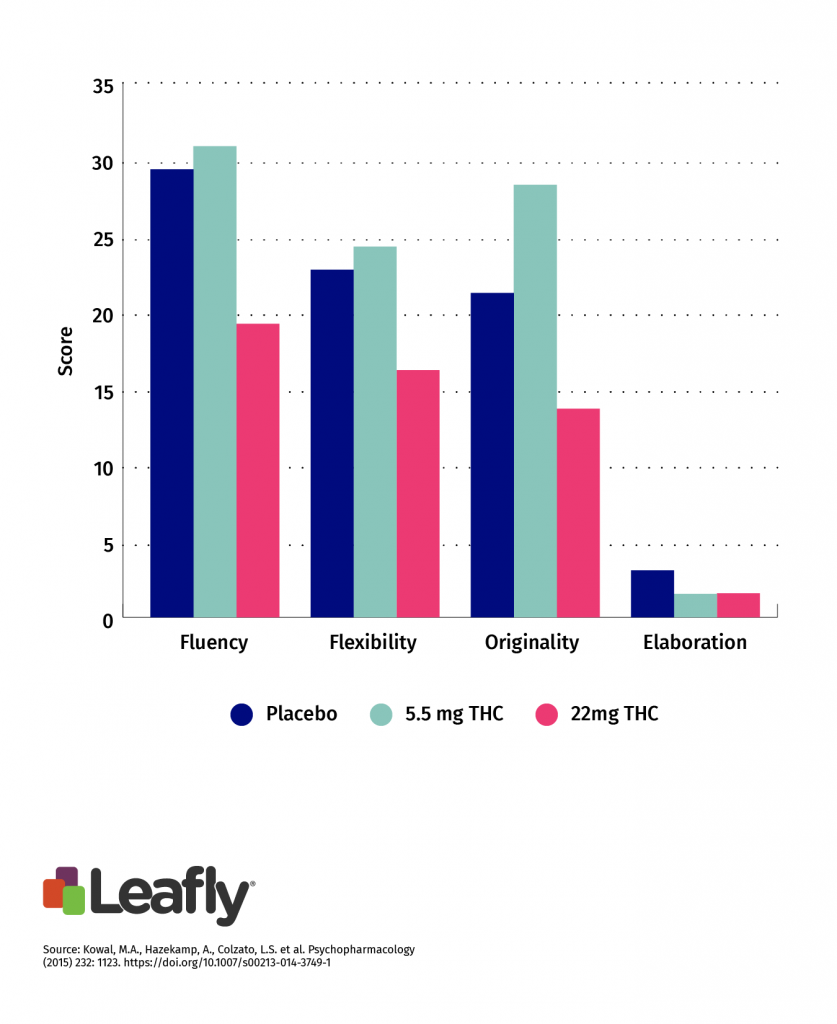 And, not surprisingly, scores were significantly raised for originality, or the uniqueness of responses. However, when the dose was increased to 22 mg of THC, scores were markedly lower in most categories. (Elaboration, or the amount of detail provided in explaining a response, was low all around–but was slightly higher in the placebo group.) 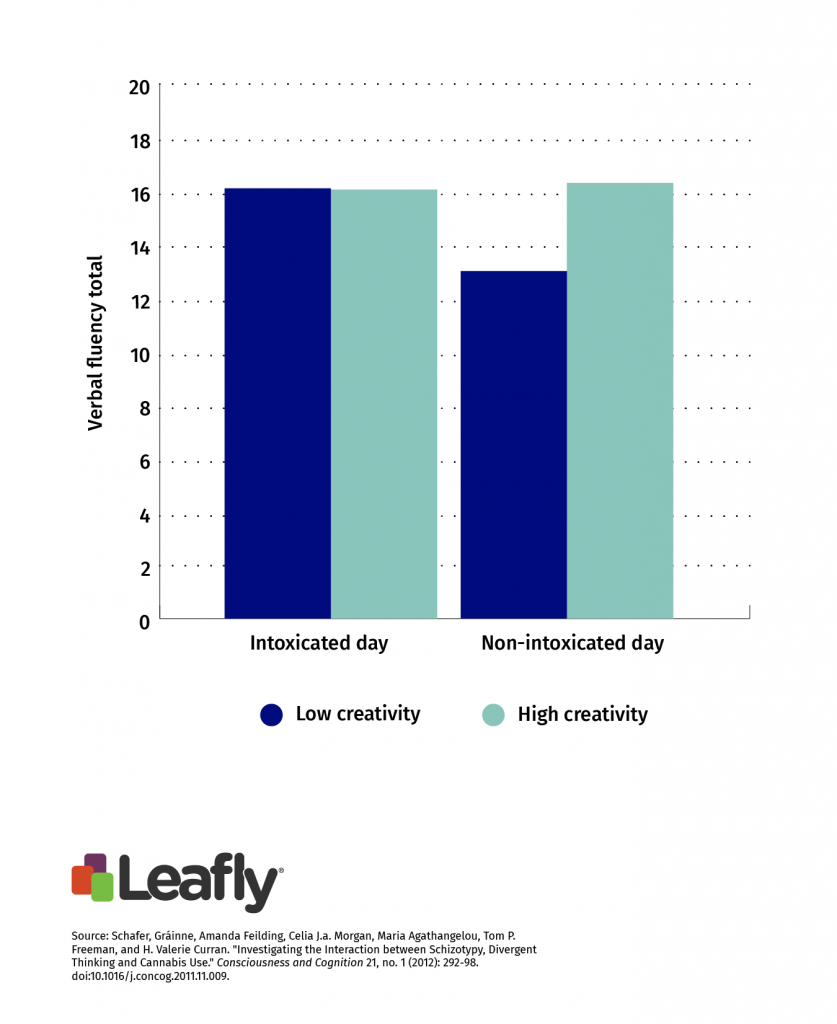 A Chicken and Egg Situation

The results from this final 2017 study suggest that the people hanging out in my friend’s marker-covered bedroom may have been more creative to begin with. It found that cannabis users both self-reported being more creative as well as veritably scoring higher when their creativity was tested.

However, the study also tested personality types. It used a popular measure called the Big 5, and found that cannabis users scored higher on “openness to experience.” Because this measure reflects high creativity and imagination traits, these findings lead the study to conclude, “While cannabis users appear to demonstrate enhanced creativity, these effects are an artifact of their heightened levels of openness to experience.”

These results pose a bit of a chicken-egg dilemma: does cannabis use improve creativity or do creative people just tend to like cannabis?

In the End, See What Works for You

As with other areas of cannabis research, there’s a lot of work to be done in regard to studying the link between cannabis and creativity. But, in summary, research suggests:

In the end, scientists don’t have a hard conclusion on this very abstract matter. So if you’re already creative and attest that cannabis does further increase your ability, or if you do your best work after 20 mg of THC, then how scientists predict you’ll score on a specific verbal fluency test isn’t particularly relevant.

Do what works for you. And if you’re still figuring out how cannabis affects you creatively, try playing with different dosages, creative activities, strains, and environments to see if cannabis can help you tap into your inner artist.