It’s awful that there are sick children in this world, that someone so young could already be tied to grown-up matters like mandatory daily medicine. Unfortunately, it’s a very real situation for many families, and its complications are made considerably more so when that medicine is federally illegal. But, due to the extensive nature of the endocannabinoid system (ECS), cannabis can be used to fight many diseases—and many of these ailments can affect people of all ages, not just adults.

We talked with a couple of families with children who regularly medicate with cannabis, aiming to get a picture at what this lifestyle is like, what kinds of challenges they face, and how cannabis has transformed their lives. We discovered stunning stories of improvement, innovation, and a couple of families who’ll make you wish there was a bigger word for “inspiring.” 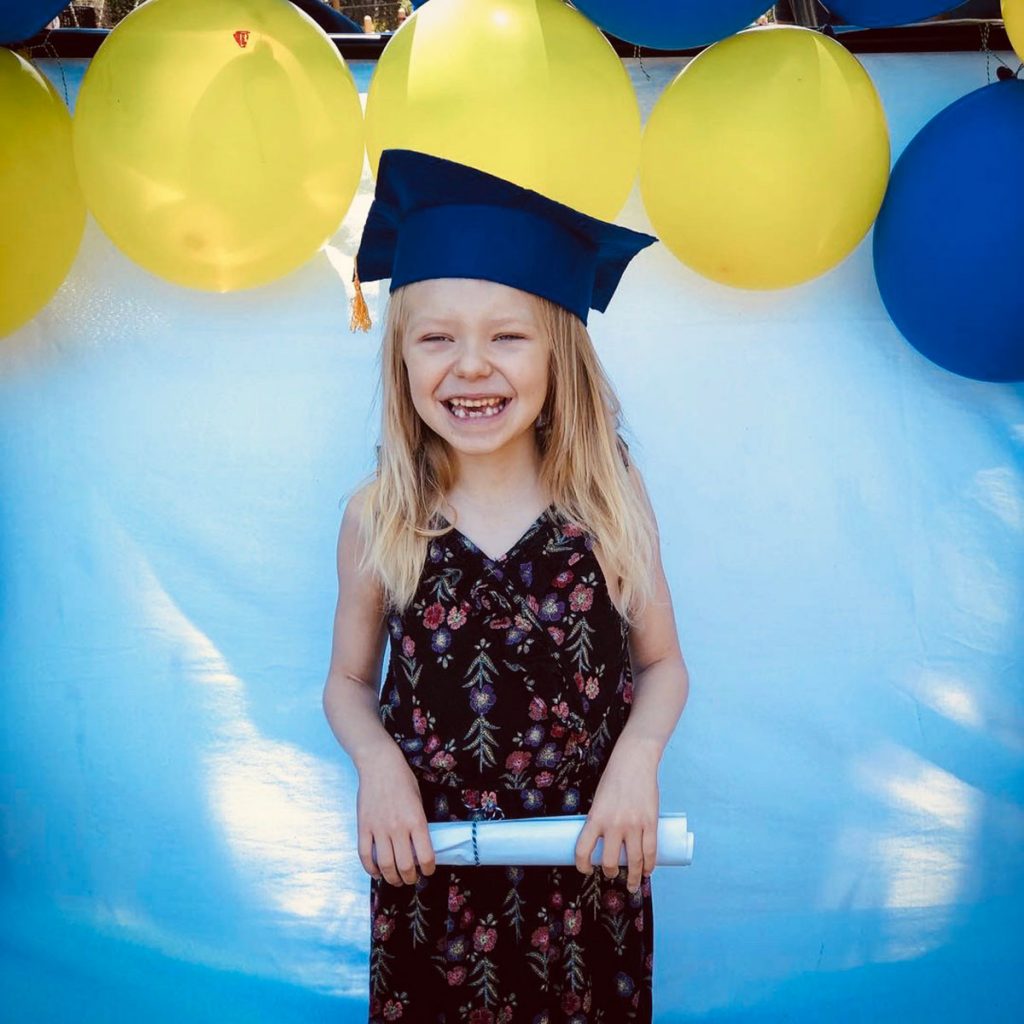 (Courtesy of the Ryan family)

Sophie Ryan was born October 3, 2012 a perfectly healthy baby girl. But it wasn’t even a year before an MRI diagnosed an optic pathway glioma brain tumor, which doesn’t normally shrink with chemo. Things didn’t look good. Then her parents created a Facebook page called “Prayers for Sophie,” and a friend put them in touch with Ricki Lake and Abby Epstein, who were filming Weed the People, a documentary about the possibility of cannabis oils treating cancer in pediatric patients.

In a phone interview with Leafly, Sophie’s mother, Tracy, told us that Sophie took her first cannabis medicine at 9 months old in the film—a drop of high-concentrated CBD and THC oil on top of her food before beginning chemo treatment. Because Sophie was just a baby, they had to watch her mannerisms to try and gauge dosing, but the only side effects they’ve noted was sleepiness at the beginning, and a higher appetite, which is perfect for a chemo patient.

After 13 months of chemo and high doses of cannabis oil, Sophie’s “unshrinkable” brain tumor was about 85 to 90% gone. Tracy shared with Leafly that even Sophie’s doctor, who was originally skeptical about cannabis, had to concede that cannabis must have helped.

Its’ not just in results that Sophie’s cannabis treatment differs from chemo, her parents note. In addition to being more expensive, Tracy said, “Chemotherapy makes you very sick, it destroys your immune system, it causes organ failure. They lose their hair, they get sores all over their bodies and inside their mouths… Sophie was getting chemo burns when she was in diapers and we’d have to use gloves so we wouldn’t get the chemo acids on our skin—it’s that horrible. And then you have cannabis, and it’s doing the opposite of all that.”

Fortunately, Tracy hasn’t gotten much judgement. She works to ensure that she’s a trusted voice, making sure she’s on top of research and bringing Sophie to lots of speaking engagements to show proof of how healthy she feels, despite chemo. (Tracy said Sophie is a natural and loves doing these events, with rare exceptions.) 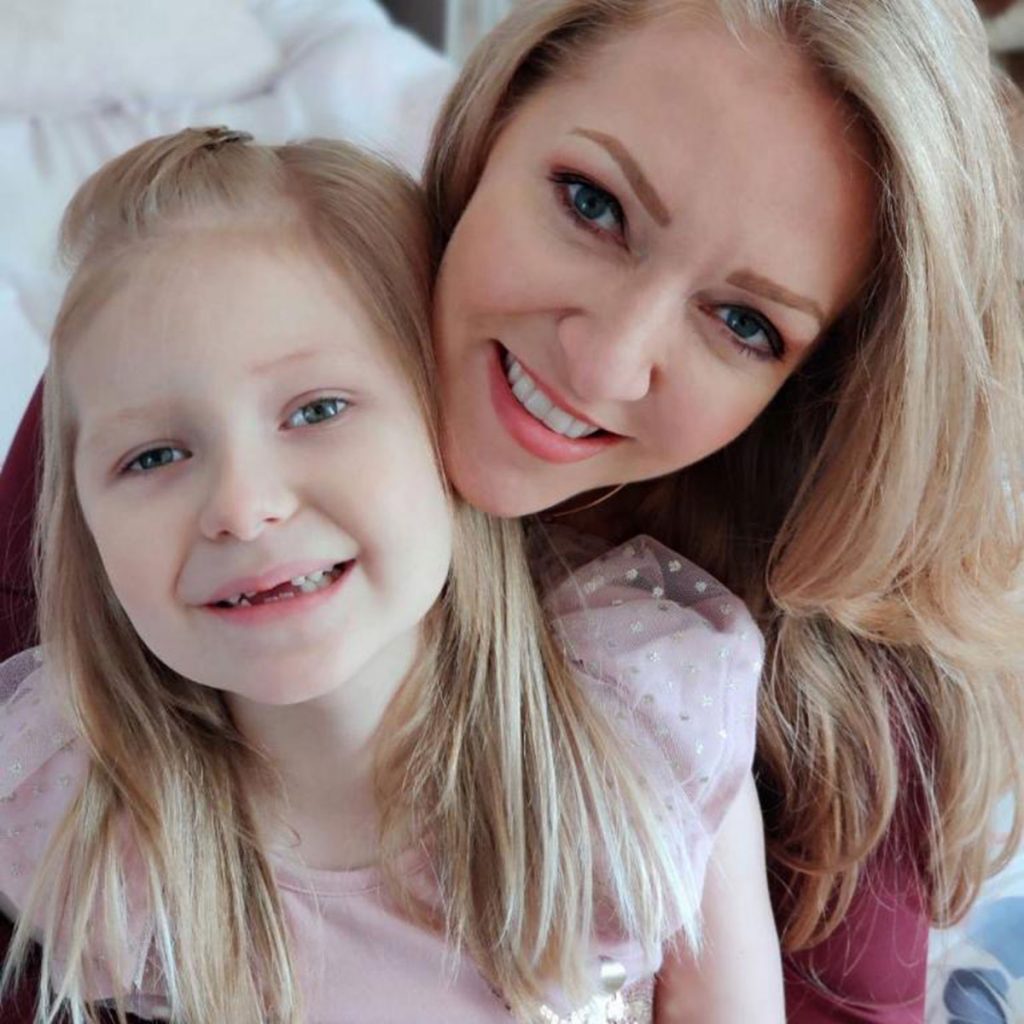 (Courtesy of the Ryan family)

After discovering the incredible ways cannabis could heal, Tracy decided to create her own business, CannaKids. They’re now selling high quality tinctures and syringes throughout California and are working on expanding to Canada and Australia, as well as starting a nationwide hemp line with 6-9 cannabinoids. Like many, legalization presented some significant issues, with Tracy sharing that her business “almost didn’t survive the costs and demands of legalization.” For instance, they have had to change the name because of laws about marketing cannabis to children; CKSoul is the new product line, and CannaKids will continue to operate as a non-commercial resource.

They’ve also started a foundation called Saving Sophie, which has raised $60k but Tracy said, “That’s like a week’s work in a laboratory. They’ll need about a half million to get rolling.” And the Ryans have also started a podcast to promote awareness and raise funds—check it out here. 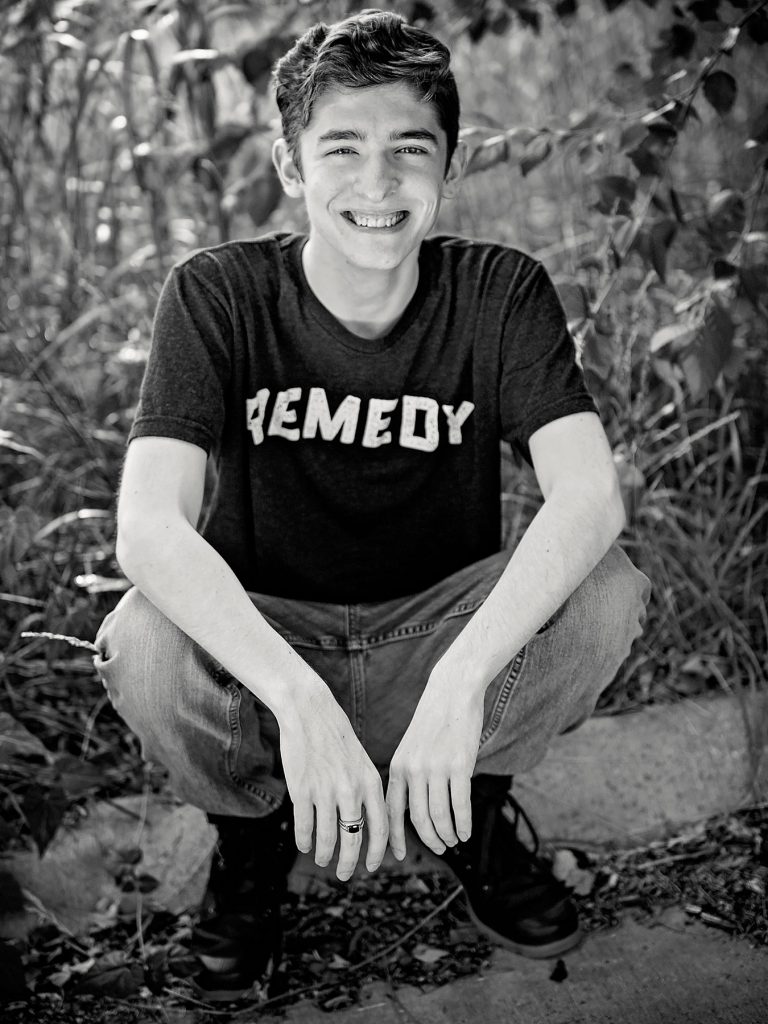 Coltyn Turner developed Crohn’s disease when he was 11 years old, after a near-drowning incident led to a bacterial infection. For the next three years, he’d try various traditional treatments, which he and his mother, Wendy, say nearly killed him. In a phone interview with Leafly, Coltyn shared, “The pharmaceutical medications that I’ve tried [range from] pills that do absolutely nothing, to shots that gave me nosebleeds, profusely, for 15 minutes straight, [to] another chemo-like infusion treatment gave me medically-induced rheumatoid arthritis (RA) and lupus.”

You read that right. Coltyn and his family report that traditional medications left him with two more chronic illnesses, each capable of rendering a person debilitatingly ill on their own. Yet, there’s more.

They eventually tried cannabis. “When I got introduced to cannabis, within the first two weeks I was already out of my wheelchair. I felt like a normal kid again,” Coltyn said.

And he’s got proof of the positive changes. “I [went from] 22 centimeters of inflamed bowel with skin lesions, with everything you can imagine—inflammation, ulcers, scar tissue, granulation lymphoma—to a normal colon; no active Crohn’s disease, just using cannabis. So not only did cannabis treat the pain, which is important, but it also took care of what was causing the pain. It also helps with the RA and lupus I got from the [pharmaceuticals].” 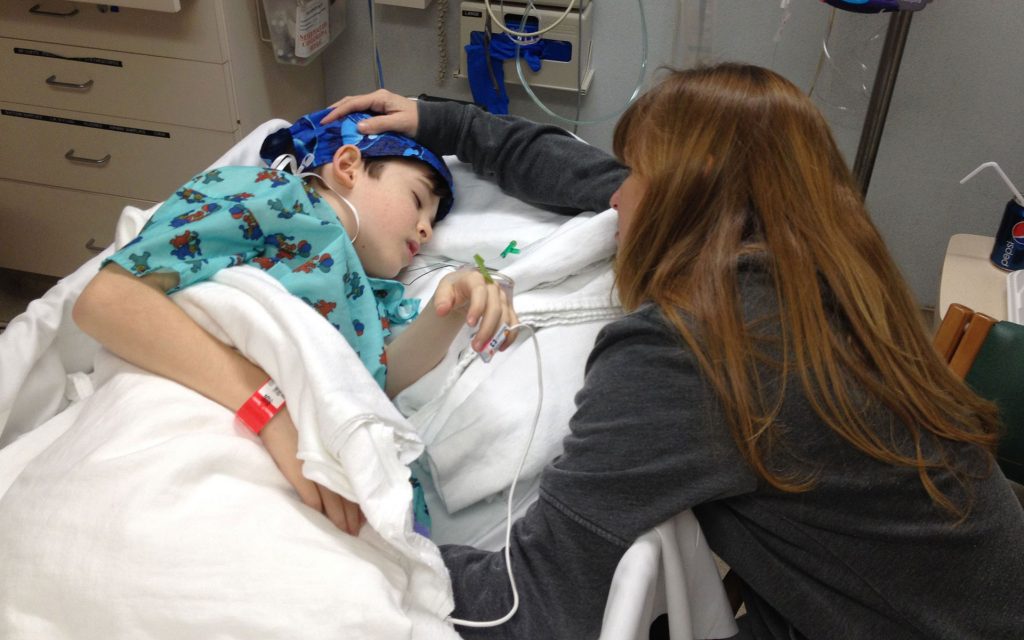 Coltyn is now 19 years old, having been on cannabis for five years. And his Crohn’s is in remission; they report hardly ever having to go to the doctor these days. He still occasionally gets symptom flares, but is able to control them by upping his cannabis dose during those times. They’ve a great handle on it these days, but they say there were some challenges early on.

Wendy said the main challenge is dosing and ensuring that Coltyn gets the right amount of cannabinoids without getting high. “We are constantly like, ‘How are you doing, how are you feeling?’” she said. “He must be really, really sick of it.”

But Coltyn isn’t phased. “Yeah, I am, but at the same time it’s very important because a lot of patients don’t really know their dose, especially earlier in their cannabis treatment, and you’re changing it pretty frequently,” he said. “When I first moved out of Colorado to start cannabis treatment, we kept a journal and wrote down every little thing that happened: what I ate that day, how many times I went to the bathroom–if I had a stick of gum, we wrote it down. Unfortunately that’s the only way to develop a regimen for people, through trial and error, trying everything under the sun until you find something that works best for you.”

Wendy shares that there were some learning curves on their path. “Sometimes we mess up. For instance, now we know to never give a Crohn’s patient THCV.”

Coltyn adds, “What we know about THCV is that it’s an appetite suppressant. For someone with a wasting syndrome, that’s not a good cannabinoid to have. But we didn’t figure it out until I lost 10 pounds. That’s the struggle with there being no research or anything.”

As far as medicating during school, Coltyn said, “Fortunately, I’ve been homeschooled my whole life, but there are kids who are having trouble having medicine in school. A lot of the time they aren’t even allowed to have it 200 or 1,000 feet from a school. There are kids with seizures who go to public school, and if they need a rescue med, they have to have their parent come to school, pick them up, drive off campus, administer it, then bring them back.” 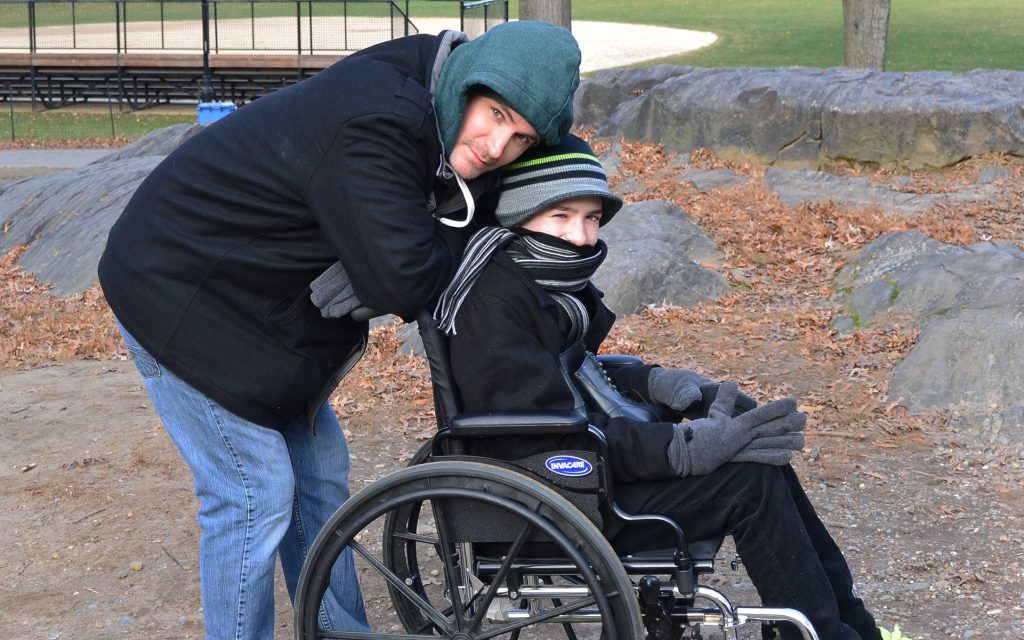 Wendy said that legalization has affected this issue negatively. “These newly legalized states emerging and creating regulation issues in schools with zero tolerance laws. Coltyn attended school for 38 days and we took him out because we couldn’t deal with it. There’s not a feasible option for it, not even in college.”

She added that there is a student suing their school over this issue, and said it’s crazy that pharmaceuticals, which can kill you if abused, are allowed in school, but cannabis isn’t.

Wendy said that without interstate commerce, medicating can also be a challenging task when getting medical care. “Every person who has a medical card is a prisoner of that state,” she said. “Most of Coltyn’s doctors are across state lines in Missouri and the second we cross that state line, Coltyn is illegal. And if he were to break his arm or something, I would have to tell them that he’s medicated with THC. And I cannot give him those meds for Crohn’s disease if he were to have to stay in the hospital for this broken arm for more than a day. So, there we go, into a flare with his Crohn’s disease.”

When asked if they’ve faced much judgement for medicating Coltyn with cannabis, they happily report that they don’t. Tracy shared that it probably has a lot to do with her being an intimidating mom, ready to get into the facts and statistics with doctors and other medical professionals as needed. 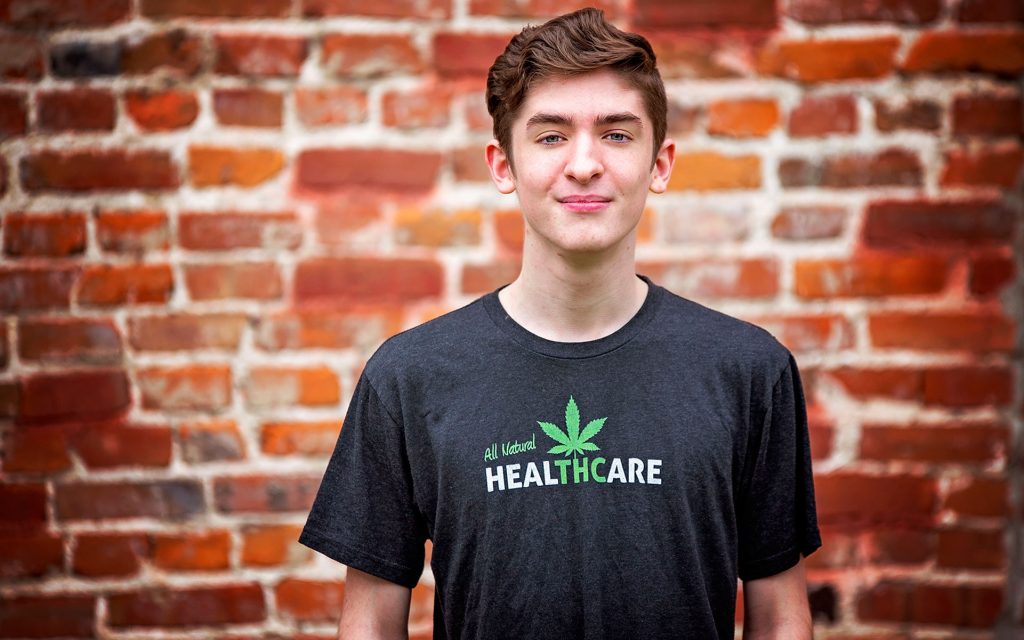 And their advocacy for cannabis doesn’t end there. The Coltyn Turner Foundation is focused on research and raising the funds to get it done–their first project is a survey of Crohn’s patients using cannabis, which is aimed at getting solid data on how it’s working in their systems that can be used as a resource for other patients. “I felt like it was important, Coltyn said. “All the time I approach doctors and patients who don’t know that cannabis works, and the one thing they say is ‘there’s no research.’”

His mother added that that isn’t the whole truth, “One of the problems we have in the states is our ego, especially with these doctors who say ‘there’s no research,’ just because the research isn’t coming from the US, which has to go through the DEA and other enforcement agencies,” which, of course, aren’t big fans of approving studies with Schedule I drugs—an infuriatingly circular dilemma. But Coltyn’s up for the challenge.

“When the government doesn’t do something right, the people have to do it themselves,” he said. “I’d rather be illegally alive than legally dead.”